Why I got kicked out of the Whisky a Go Go

With the recent passing of Mario Maglieri at age 93, founder, owner, and manager of the Whisky a Go Go, I thought I’d relate my own experience with Mario, and how he had an influence on the future of Musicians Contact.  In the 70’s I sang in different bands that played all the Hollywood clubs, but the only time I performed at the Whisky was as a backup singer to an all female act who opened for Elvis Costello one night.  But this story is not about performing…….

My first Musicians Contact office was located inside an old house that had been converted into a little theater.  I rented a tiny space in front for $60 a month.  It was on an obscure Hollywood side street which musicians had a hard time finding.  After only three weeks, a guy told me that there was a vacant office in the Whisky.  I checked it out and immediately grabbed it, for $70 a month.

It was the best move I ever made.  I was upstairs, right next to the Whisky booking office, so all the bands had to pass my door to do their business.  Within weeks, Todd Rundgren, Albert Collins, Dr. John, Canned Heat, Ed King, Gary Puckett, the Beach Boys and others came in to look for players.  Now EVERYONE could find me – all I had to say when someone asked for my address was “Upstairs in the Whisky”.  Business boomed.

The club was owned by Elmer Valentine and Mario Maglieri.  One day after several months, Elmer walked in and told me I’d have to leave because I was “attracting too much traffic”.  To get to the upstairs offices in the daytime, people entered a side door and walked up a narrow staircase.  Halfway up, a small door entered the Whisky balcony, so it was possible to actually get inside the club, sleep, try the soft drink machine, or maybe hide out until evening when the action started.  The management was having problems with this, and assumed my customers were the cause.  I was devastated.

A friend suggested I talk to Elmer’s partner, Mario, who arrived in the evening.  The next night I found Mario talking to three of his waitresses and mentioned what Elmer had said to me.  “If Elmer told you to get out, you have to get out”, was his quick response.  It was bad timing on my part.  I was just a 22 year old with no negotiating skills talking to a big shot. 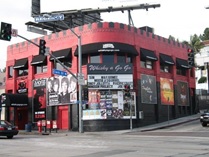 So a month later I moved to a larger office a mile down Sunset Boulevard.  I suppose it all worked out for the better in the long run.  I regret not ever telling Mario that starting in the Whisky really jump-started my business, and I’m sure he would have been surprised to know that the guy he kicked out 48 years earlier was still in business!  I’ve heard many stories about Mario over the years and 99% have been positive.  Zillions of bands have played the Whisky.  Do YOU have a Whisky tale?