I saw The Beatles at their first US gig

You’ve realized by the subject line that this is not our usual blog.  It’s my account of when I saw The Beatles at their very first U.S. concert.  I know, I know, their first show in the U.S. was on Ed Sullivan, February 9, 1964, where a record audience of 73 million viewed them on TV and changed lives and musical history forever.  But they did one quick gig at the Washington D.C. Coliseum two days later, February 11, before flying back to England.  Only 7,000 people attended that show and one of those lucky people was me. 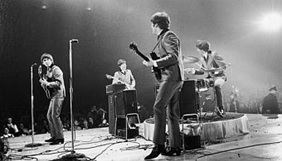 I was 16, attending high school in Arlington, VA, across the river from Washington D.C.  My best friend, Reg, told me he saw a full page ad in the newspaper to see The Beatles.  (People actually read newspapers back then).  Did I wanna go?  Sure.  Tickets were $4 and immediately sold out.  Two nights later Reg’s dad drove us to the concert.  It had been a “snow day” with all schools closed, but somehow that didn’t stop us.  Also on the bill were the Caravelles, the Chiffons, and Tommy Roe, with his hit “Sheila”.

The show started, but Tommy Roe never came out.  Apparently he was sick and was replaced at the last minute by an unknown singing duo called The Righteous Brothers.  They looked out of style with their pompadours, nothing like the current English trend.  We thought “Who are THESE greasers?”  But within minutes we said “Who ARE these guys – they’re fantastic!”  They really got the place rockin’.  Next were the Caravelles, two English girls singing their sweet hit, then the Chiffons singing their r&b hits.  Then the announcer welcomed The Beatles and the place went nuts.  It was a fast 35 minutes of pure pandemonium.  They did about 12 songs.  Actually I remember very little of it – how was I to know I was witnessing history?

The Beatles played on a circular stage, completely surrounded by fans.  They actually moved their own equipment a few times between songs so they could face different directions.  Girls threw jelly beans at them and I saw an entire bag of jelly beans bounce off Ringo’s drum.  (They had once told a reporter that their favorite food was jelly beans).  After the show Reg and I picked up a few squashed jelly beans on the stage.  I took them to school the next day and gave them to a couple girls.  What was I thinking?!  You can see lots of footage if you Google the concert, but I’ve yet to see any film of the opening acts.

Walking out of the auditorium we passed some souvenir sellers.  One had a large barrel filled with little blue stick pin buttons with “I love Beetles” printed on them.  I told the guy he made a mistake in spelling, and he winked and said “I know”.  It took me awhile to realize that of course he spelled it that way so he couldn’t be sued.  I’ve often thought I should have bought one – it would probably be worth more now than the real item!

Living so close to Washington D.C. I had already witnessed two life-changing events in less than six months.  In August, 1963, I heard Martin Luther King deliver his “I Have A Dream” speech, and three months later I stood in line to view President Kennedy’s casket lying in the Capitol.  And now, just another three months later, The Beatles.

Driving home with Reg and his dad, I remember wondering aloud if I should save my ticket stub.  Would it be worth anything one day?  I never did, but my pal Reg was smarter, and kept his stub..... from 53 years ago.